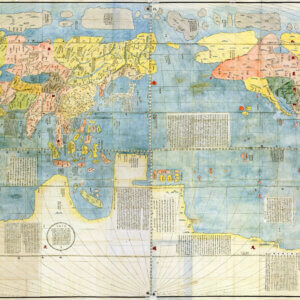 In January 2010, a unique world map was exhibited at the American National Library in Washington. A map of over 400 years old, printed on six rolls of extremely delicate rice paper. The Italian Jesuit and missionary Matteo Ricci made the map in 1602 on behalf of the Chinese emperor Wanli. With a value of no less than 1 million US dollars, it is the second most expensive map in the world.

It is the first Chinese map that shows America. There is something else that makes this world map special: the map shows China at the centre of the world. That image fascinated me from the first moment I saw it. Until then I had only seen world maps that had Europe in the centre of it. If you look at a world map with China in the centre for the first time, you think the map is incorrect. Or that it is a joke. It feels like when I visited England for the first time and I seriously thought THEY were driving on the wrong side of the road.

You and your language, your country and your continent are central in your picture of the world. You will only be able to get rid of that picture if you can look at the world from someone else’s perspective. Then you will understand that he looks at the world from his perspective and you view the world from yours. And that our world view is largely determined by looking at a world map in which the Western world is central.

For me, Matteo Ricci’s world map has become a metaphor for the image that companies have of their customers. A whole new world order is being created. Products and services, price, distribution and communication will remain important, but they are no longer decisive. Decisive for success are: authority & touchability, accessibility & reliability, credibility & integrity, attention & relevance. There is only one person who determines whether you score convincingly on those points: the customer.

If the customer judges you poorly, it is time to worry. The examples of companies that found out too late are already there. DSB Bank, for example. DSB Bank did not perish as a result of the credit crisis. And also not because of De Nederlandsche Bank. DSB has collapsed due to a lack of customer confidence. When large groups of dissatisfied DSB customers finally managed to unite, collectively made a fist and lay claim, the bank’s fate was sealed. T-Mobile also experienced how powerful customers are today when Dutch comedian Youp van ‘t Hek suddenly gave a large group of dissatisfied customers a voice. Today, T-Mobile listens well to customers and does what it needs to do to regain customers’ confidence.

Winners in a New World

The new world order in which the customer has the ultimate power to decide about your life or death, has consequences for every company, for every organization. Also for government and semi-government. Also for healthcare institutions, educational institutions, provinces, and municipalities. Patients, students, and citizens are also customers. Tomorrow’s winners are those organizations that succeed in giving their customers a voice, in listening carefully to them and in tailoring their products, services, and communication to their wishes. If they succeed in making their customers feel seen and heard, these companies will become listening leaders in their field. These companies and their customers will enter a beautiful new world.